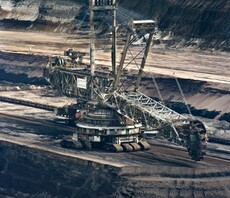 China’s National Energy Administration (NEA) has this week issued a new statement suggesting the government could squeeze the country’s coal power plant pipeline. The document indicated the agency would “further clarify the strict control of coal power plant projects, and in principle not [permit] the construction of any new coal power plants designed exclusively for electricity generation”.

Writing in a Twitter thread, NGO China Dialogue said the update from the agency also highlighted how it intended to provide “active support” for the further development of hydro, solar and wind power, and the development of transmission links between provinces.

The update follows China’s successful lobbying at last year’s COP26 Climate Summit to water down a commitment to phase out the use of unabated coal power globally, which was replaced with a pledge to “phase down” the use of the carbon intensive fuel.

Coal power project pipelines in Asia have been contracting in recent years as a result of intense competition from renewables and gas. However, with gas prices soaring in response to Russia’s attack on Ukraine fears are mounting that economies could turn to coal power to help combat looming energy shortages.

The European Commission is poised to next week publish a sweeping new strategy to accelerate renewables development and diversify its gas suppliers in a bid to end its dependency on Russian gas.

EURACTIV reported that it has seen a leaked draft version of the plan, which had been due to be released this week but has been hastily revised in response to Russia’s invasion, the resulting threat to the bloc’s energy security, and the growing calls for sanctions on the Kremlin to be extended to cover Russia’s fossil fuel exports.

“Reducing our dependence on a single supplier of fossil gas requires diversification of gas supply and using the full potential of green and low carbon energy sources,” the draft states, adding that “to frontload the security of supply benefits of the European Green Deal and reduce our dependence on a dominant supplier for natural gas imports, the New Energy Compact will scale up renewable energy in Europe by mobilising additional investments, removing roadblocks to renewables roll-out and empowering consumers to play an active role in the energy market”.

The move follows calls this week from European Commission President Ursula von der Leyen for government’s to respond to Russia’s aggression by drastically beefing up efforts to curb Russian fossil fuel exports. “Every kilowatt-hour of electricity Europe generates from solar, wind, hydropower or biomass reduces our dependency on Russian gas and other energy sources,” she said. “This is a strategic investment because, on top, less dependency on Russian gas and other fossil fuel sources also means less money for the Kremlin’s war chest.”

The site is set to become one of the largest offshore wind port facilities in America, according to the New York City Economic Development Corporation (NYCEDC), while supporting the city’s goal of securing 100 per cent renewable power by 2040.

“With this investment, the South Brooklyn Marine Terminal will soon be transformed into one of the largest offshore wind port facilities in the nation,” Adams said in a statement, predicting that offshore wind in New York is expected to support 13,000 local jobs and generate $1.3bn in average annual investment. “This is a transformative moment for New York City and our clean energy future – a future of sustainable power, good-paying jobs, and climate justice,” he added.

Germany ramps up work on 100 per cent green power plan

The German government is reportedly working on plans for a new strategy that could make the country’s power supplies almost 100 per cent renewable by 2035.

In a draft paper seen by Clean Energy Wire, the economy and climate ministry proposes higher renewable capacity targets for 2030, which would aim to bring Germany’s clean energy plans into line with a 1.5C warming trajectory.

Specifically, a new Renewable Energy Act is expected to set a goal for Germany to operate a fully renewable power system “before 2050” backed by a target to secure up to 110GW of onshore wind capacity by 2030 – more than double current levels – 30 GW of offshore wind capacity, and 200GW of solar capacity.

The plans are expected to be presented to Cabinet as early as next week before then moving through the parliamentary process, as the government seeks to fast track measures to curb the country’s reliance on Russian gas imports.

The German Federal Ministry for the Environment, Nature Conservation, Nuclear Safety and Consumer Protection (BMUV), the UN Environment Programme (UNEP), and the Secretariat of the Convention on Biological Diversity (SCBD) have this week jointly announced the establishment of a Multi-Partner Trust Fund (MPTF) on Nature for Health.

Announced on World Wildlife Day, the Fund, which is backed by an initial contribution of €50m contribution from from Germany’s International Climate Initiative (IKI), brings together leading UN agencies, intergovernmental organisations and civil society groups in the field of environment and health.

The new Fund aims to help countries achieve more holistic policymaking by creating further evidence of the links between biodiversity, climate and health, and will support decision makers and relevant actors to take measures to prevent future pandemics, UNEP said.

“Above all, the Multi-Partner Trust Fund will focus on implementation,” said said Steffi Lemke, German Minister for the Environment, Nature Conservation, Nuclear Safety and Consumer Protection. “Implementation of preventive One Health action and policies at the local, national and regional level. It is necessary to work together to develop the full potential of biodiversity to contribute to our health and well-being across the planet.”

Inger Andersen, UN Under-Secretary-General and Executive Director of UNEP, said the initiative would seek to draw on some of the lessons from the coronavirus pandemic, which “has revealed how interconnected nature and human well-being are”. “To address the triple planetary crisis of climate change, biodiversity loss, and pollution and waste, we need a true One Health approach,” she said. “This is the only way to secure the health and well-being for current and future generations.”

The fifth UN Environment Assembly concluded this week in Nairobi with 14 resolutions finalised, including the landmark commitment to negotiate a new treaty to tackle plastic pollution.

“Against the backdrop of geopolitical turmoil, the UN Environment Assembly shows multilateral cooperation at its best,” said Espen Barth Eide, the President of UNEA-5 and Norway’s Minister for Climate and the Environment. “Plastic pollution has grown into an epidemic. With today’s resolution we are officially on track for a cure.”

Alongside the headline grabbing plans for a new plastics treaty, the meeting also saw an agreement to establish a comprehensive and ambitious science policy panel on the sound management of chemicals and waste and preventing pollution, while a third resolution agreed by the Assembly focuses on promoting the development of nature-based solutions. The resolution calls on UNEP to support the implementation of such solutions, while safeguarding the rights of communities and indigenous peoples.

“Having a universally agreed definition of nature-based solutions is important,” said Inger Andersen, Executive Director of UNEP. “When countries and companies claim that their actions are supporting nature-based solutions, we can now begin to assess whether this is accurate and what it entails. This is especially true given the just-released report by the Intergovernmental Panel on Climate Change on the need to scale-up adaptation, for which nature-based solutions will be crucial.”

Florida’s state House this week passed a plan to create a state-wide climate resilience office, securing corss-party backing the move with just one vote against.

According to reports by The Hill website, the bill would require the state to develop a resilience strategy for its highways and other key infrastructure, while providing information on prospective costs and upgrade requirements. It would also create a central database of sites such as hospitals, utility headquarters and airports that are at direct risk from rising sea levels.

The plan secured cross party backing, but the chamber’s Republican majority reportedly voted down an amendment that would require the state’s resilience officer to also factor in root causes of climate change into their analysis.