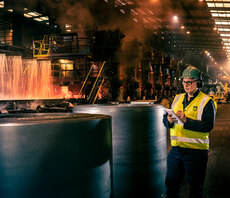 Exclusive: First-of-its-kind report into steel and iron sector decarbonisation concludes net zero by 2050 is entirely possible for the industry

The iron and steel sector has long been placed among a raft of industries deemed ‘hard-to-abate’ – in other words, heavy industries that are notoriously difficult, expensive, and perhaps even impossible to decarbonise. The sector, which relies on hugely energy-intensive production processes, is responsible for more than 10 per cent of global emissions, after all. And just as its climate footprint should be shrinking, demand for steel and iron is expected to grow exponentially to meet both the infrastructure demands of a growing population and the need to deploy millions of wind turbines and solar panels.

But a major report published this morning has urged policymakers and industry to stop casting the steel sector as a ‘hard-to-abate’ industry that is part of the ‘last 20 per cent of emissions’ the world intends to tackle, arguing such labels are unfounded and have even played a role in stymying decarbonisation in the sector.

Far from being impossible, the technical report argues the steel and iron sector can achieve net zero emissions “by several different means” by 2050 – the industry has options. The analysis, produced by the Institute for Sustainable Development and International Relations (IDDRI) for the new Net Zero Steel Project initiative, offers a practical roadmap for how national and business actors can work together to achieve net zero emissions, setting out a number of steps they must follow to fast-track the sector’s transformation.

Report author and associate researcher at the IIDRI Chris Bataille stressed that a climate-aligned steel sector was technically feasible, but action needed to be taken in the short-term to catalyse the industry’s decarbonisation. “Net zero steel production is possible, but time is of the essence for innovation, commercialisation and uptake of low carbon processes,” he said.

The research warns that delivering on the net zero target will depend on a mix of political will, global coordination between steel players and governments, and targeted public and private sector investments that bring down the costs of critical zero and low emissions technologies. Specifically, it calls for the development of public and private preferential green steel procurement programmes, investment in infrastructure for CO2 disposal and hydrogen production, new carbon pricing regimes and competitiveness protections, and clear plans for managing stranded assets and ensuring workforce and community trauma can be minimised as the industry transforms.

In the report’s introduction, Bataille expresses hope the research will challenge the notion – prevalent across much of the sector and amongst policymakers – that the steel sector’s transition will be slow or heavily dependent on carbon offsets. “This will shift the conversation to the much more real and challenging effort that needs to be made,” he writes.

Anne-Claire Howard, CEO of the Responsible Steel global sustainability certification scheme, welcomed the fresh analysis, noting that it “stands out because it presents a clear roadmap for a 2030 steel sector emissions target” aligned with the Paris Agreement’s more stretching 1.5C temperature limit.

Howard said the report’s recommendation of a 29 to 31 per cent emissions reduction target for 2030 was a “much-needed, near-term, sector-wide benchmark”.

“Standard setting organisations like ours need substantive baseline data to align voluntary action by companies and help shift policy in a coordinated fashion in key economies,” she said. “Sector-wide efforts are what is needed now for accelerated action. I’m excited to see how this will positively shape the climate talks in Glasgow and beyond.”

The research warns that achieving a net zero steel sector by 2050 relies on “crystal clear communication” that all investment in unabated blast furnaces and basic oxygen furnaces – grouped under acronym BF-BOF – must end by 2025. From that date, steelmakers should only invest in BF-BOFs where up to 90 per cent ‘end of pipe’ carbon capture and storage (CCS) technologies can be installed, or pursue alternative clean steel and iron production technologies.

Roughly 70 per cent of installed steelmaking capacity around the world relies on the high carbon BF-BOF method, in which iron ore is smelted with heat generated from burning coal, with the fossil fuel also acting as a “reducing agent” to turn the ore into metal. The other, less common method to produce steel is by using electric arc furnaces (EAFs), which uses electricity to produce steel either from recycled scrap material or from iron ore that has been reduced by a gas in a process known as direct reduced iron (DRI). The emissions from the latter method – known as DRI-EAF – vary depending on the power and fuel they rely on at various steps of the process, whereas the emissions from BF-BOF method are astronomical.

The report argues there are two critical breakthrough technologies that are likely to replace ageing fossil fuel furnaces by the end of this decade. The first is electrolysers – the technology that helps produce green, or renewable, hydrogen and is therefore key to commercialising renewable hydrogen powered DRI-EAFs. While the technology is proven and a number of projects are plotted across Europe, the report warns the costs of electrolysers must fall dramatically for DRI-EAFs to become an economic option for operators. The second solution that should be a major focus for industry and government is post-combustion CCS technology which can reduce the climate impact of high-emissions BF-BOF plants. Here, the IIDR warns progress is “arguably going too slowly”, noting that these CCS-equipped plants should be commercialised by 2030 if they are to help deliver net zero goals.

The analysis predicts the viability of both hydrogen and post-combustion CCS technologies will be “geographically determined”, noting that the former relies on huge amounts of renewable electricity and the latter on access to deep underground storage and a supportive regulatory landscape. But it also warns that as these technologies start to scale up, companies risk being left exposed to stranded asset risks with the report noting that firms that continue to invest in expensive, high carbon intensity furnaces after 2025 will likely have to retire them well before the end of their life.

Elsewhere, the report highlights how the amount of renewable energy needed for ‘green’ iron and steelmaking needs to factored into the development of clean energy grids around the world, noting that clean electricity demand from the sector will be four to seven times higher in 2050 than total electricity demand today.

The report also underscores the need for governments and industry to work together to ramp up material efficiency across the scrap steel market to reduce demand for energy intensive virgin steel production. Higher rates of steel recycling could be achieved by changing building codes, introducing new circularity regulations, and developing higher quality recycling services, the report notes.

The report’s findings were applauded by Roz Bulleid, deputy policy director the Green Alliance, who expressed hope the analysis  would catalyse much-needed action from the government and business to decarbonise the steel sector. “This research shows steel decarbonisation isn’t just possible, it can, must and will become the global norm,” she said. “That is a sea change from even a year or two ago. We have the technology, we just need the policy, investments and the scale to make this happen.”

Bulleid accused the government and steel companies of being slow to step up efforts to tackle the sector’s carbon emissions and secure a stable future for the industry as the net zero transition gathers pace. “The UK government and steel companies have been dancing round each other, unwilling to make decisions that are urgently needed to future proof steelmaking in this country and set it on a track to net zero,” she said.

It remains unclear whether the steel sector will be able to shed its “hard-to-abate” mantle anytime soon, but the report from the Net Zero Steel Project does suggest that the sector’s transition need not be as complex as is often made out. From policies to improve material efficiency to a ban on investments in BF-BOFs that are not equipped with 90 per cent post-combustion CCS from 2025, and direct investment in CCS and hydrogen technologies, the report suggests there are a range of options available for public and private players that could ensure that a greener and more profitable steel industry emerges far quicker than many experts expect. On the latter point, the report is crystal clear: companies that fail to start making changes now are opening them up to stranded asset risks and higher costs further down the line.

The report is also notable in its highlighting of the dangers associated with branding whole sectors as ‘hard to abate’, noting that the latter exercise can untimately encourage weak policy action, low industry benchmarks, and a dearth of detailed scenario planning – all of which hamper a sector’s chances of decarbonising quickly and expose it to stranded assets. Interestingly, the report comes in the same week as the concrete and cement industry announced ambitious new emissions reduction goals for 2030, as it similarly sought to challenge the idea that it is simply too difficult to decarbonise carbon intensive industries.

“Unfortunately, the history of treating steel as “hard to abate” or part of the “last 20 per cent of emissions” has meant there is a lack of ambitious global steel decarbonisation roadmaps or scenarios, and more generally a vision of how steel might be 1.5 to 2C compliant without very substantial additive, verifiable, permanent and traceable natural or technological offsets which may not materialise in sufficient quantity at a reasonable cost,” the report warns. On the other hand, it also stresses how a detailed plan for decarbonising the industry should serve to “stimulate imagination and provoke debate” while being “a necessary precursor for any change in policy, planning and investment”.

With the government currently weighing calls for additional financial support to help steel and other energy intensive companies cope with the impact of soaring energy costs, it is timely to see fresh evidence that it is entirely possible to decarbonise such industries – and hear that it might not prove quite as hard as many fear.

We use cookies on our website to give you the most relevant experience by remembering your preferences and repeat visits. By clicking “Accept All”, you consent to the use of ALL the cookies. However, you may visit "Cookie Settings" to provide a controlled consent.
Cookie SettingsAccept All
Manage consent