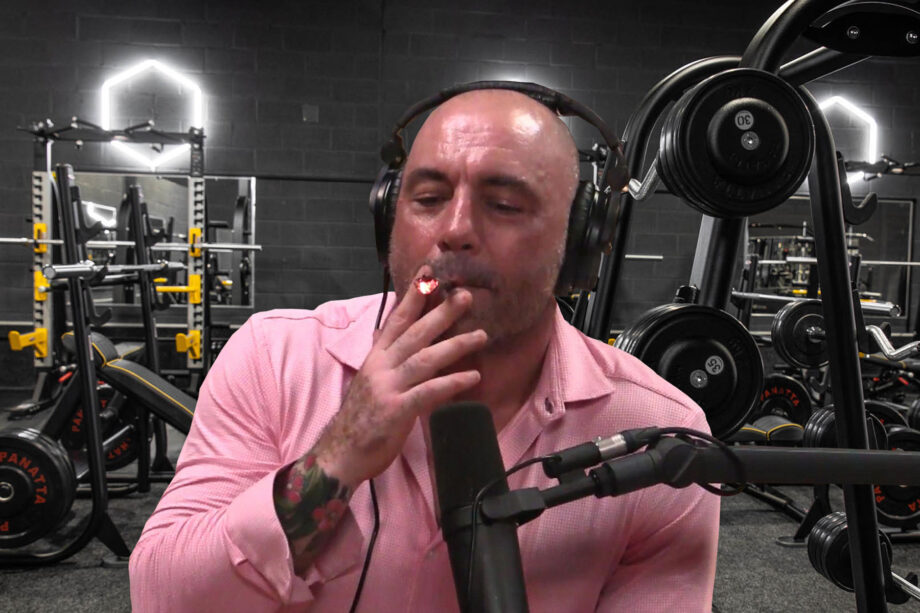 Marijuana is associated more with turning you into a globulous, sofa-bound Dorito than someone who can strike precise holes in a punching bag (and lift heavy weights).

But what about Joe Rogan?

With recreational use of weed being illegal in most countries around the world, and some countries inflicting punishment with some serious jail time for having even a small amount on your possession, there is much to insinuate it’s a drug to be avoided at all costs.

Yet, millions of people do still smoke it, and people will even talk about it openly in conversation, even those in the public eye (especially in America where it is becoming ever more legal). Case in point: Joe Rogan. The comedian and podcast host has been banging on about legalising pot ever since the early days of the podcast, and is so enthusiastic he has angered more than one right-wing guest in the process (even if they did later kiss and make up).

Rogan isn’t one to shy away from his opinions on marijuana and openly talks about using it during his podcast shows. In one particular show – number 30 – he talks about the first time he ‘properly’ smoked pot with martial arts instructor and fellow podcaster and comedian, Eddie Bravo. He even, another time, got Elon Musk to puff a joint, briefly tanking Tesla’s share price in the process.

After explaining how he had dabbled with smoking in his teenage years (but, essentially, during that period of his life, avoided it, fearing it would turn him into a deadbeat), it wasn’t until he was around 30 that he really, he says, appreciated it’s true potential for him.

“We [Joe and Eddie] were doing jiu-jitsu together, and he was telling me how marijiuana was helping his jiu-jitsu, with his music, with creativity, and I was like ‘wtf is this guy talking about?'”

“‘I’m like, man, marijuana makes you stupid, don’t you know?’ And then he gave me some to try and I remember thinking, ‘oh, this is what it is? I can’t believe it, that feeling.'”

Watch Joe Rogan talk about smoking pot and working out

Joe then explains how he would then smoke before he went on stage to perform his stand-up shows, and how it helped him get more creative with his comedic writing, as well as before practicing his jiu-jitsu: “I was like, ‘I can’t believe how zoned in it gets you with training.'”

“Smoking pot and hitting the bag is, to this day, one of my all time favourite things.”

Rogan also theorised that – maybe – smoking weed before he works out is more than just a pleasure and actually makes him feel more sensitive of his own body.

“You feel balance when you’re high, you feel like, maybe if you got an injury, you feel it more. You feel when things are off.”

“For me, I feel my transfer of power better when I’m high, like certain techniques I really get the timing of when to turn the hip over, I feel it more when I’m high. I feel the connection with the tissue, I feel it all working together.”

It’s important to point out here Joe was speaking about his subjective experience, and not giving explicit advice to anyone. He was just thinking out loud, saying what he thinks, and not being patronising with his listeners, which is what they love about his podcast.

By the same token, it’s important to point out he could be totally wrong (we’ll get to that in a bit).

Joe isn’t the only high-profile figure to enjoy getting high before working out. International playboy Dan Bilzerian, who owns a Cannabis company called Ignite, has also shown off his guns (and joints) in the gym.

When he’s not posing with a bevy of models, Dan can most likely be founding hitting the gym or engaging in some other fitness discipline, and a post on his personal Instagram account even shows him smoking whilst at the bench press station.

But why would you want to smoke a drug that can potentially inhibit your brain (and lungs) before attempting something that requires an awful lot of mental power (and cardiovascular exertion)?

To find out what sort of effect cannabis has in correlation with working out, DMARGE spoke to David McIntosh, founder of the Synergy Performance Institute, to find out more.

The short version is that there is far more evidence to suggest you shouldn’t smoke before training.

“When discussing cannabis, the two main active ingredients are the focus of the conversation – THC and CBD,” David begins.

“In 2017, a systematic review was published in the Journal of Science and Medicine in Sport. The findings were not favourable for things like strength training or aerobic performance.”

“A concerning finding was a tendency to develop chest pain due to poor blood flow to the heart (angina). In 2018, the Clinical Journal of Sport Medicine discussed the use of cannabis by elite athletes and again, found no convincing evidence for increased physical performance.”

“In 2020, an article discussed the potential benefits of the CBD component alone, and highlighted there was no good evidence at the time of the article for promoting CBD, but there were potential benefits such as being anti-inflammatory and calming.”

“Also in 2020, another review of the use of cannabis by athletes found no convincing evidence for enhanced physical performance.”

“This year, an article in The Journal of Sports Medicine and Physical Fitness found a significant deleterious effect upon athletic performance, based on more contemporary research. This included less work capacity, increased cardiac workload (leading to relative oxygen depletion in the heart), and poor balance.”

“So, with science rather than social media as our guide, it would seem sensible for those with desires for maximal athletic performance to [re]consider whether cannabis is a good choice or best avoided.”

Joe’s anecdotes, however, could also bring up the minefield that is the placebo effect. If he had a good experience the first time he smoked pot before “hitting the bag,” he could potentially only expect to continue to have good experiences moving forward.

He also never claimed he did it in order to increase his muscle mass, but rather to enjoy himself, and because he felt it made him feel more sensitive to his body.

“Placebo is more powerful than we think. There’s a whole science-based book on the topic called Biology of Belief. As a genetic testing practitioner, I know that just your belief can change the expression of your genes without taking any medications of supplements, or doing anything else other than thinking and believing!”

“Placebo also works magic in athletic performance. Athletes who believed they were getting anabolic steroids has bigger strength gains than the control group, even though their ‘steroids’ were fake.”

“Endurance athletes ran faster when they are told they were given coffee. There’s plenty of research on placebo and athletic performance. Clearly, Joe likes weed so he convinced himself it makes him train better.”

“Jokes aside, smoking weed has a relaxing effect and removing stress and anxiety can positively influence the performance of any task.”

“It just depends on the characteristics. Tasks requiring accuracy and precision and probably not going to improve when you are stoned.”

“The bottom line, don’t believe in anecdotal experiences and always read your research.”

In conclusion, Joe is free to smoke pot and work out if he wants (as are, depending on your jurisdiction, you).

But smoking weed shouldn’t be something you do before working out, if performance, muscle mass (and general physical health) are your primary goals – there’s a reason most professional athletes don’t do it, after all.

That said: we aren’t here to tell any individual what they should or shouldn’t do. If you’re prepared to sacrifice your lungs (as well as potentially other risks to your mental health) for enjoyment of a moment, or creativity, or perceived sensibility (or a blissful sense of release), that’s up to you.

In any case, we’re not in any position to condone Marijuana’s use, and it’s by no means an athletic performance enhancer, but when you do have some celebrities speaking positively about its effects, we imagine it will be something many people will be willing to consider. But consider it with your eyes open.