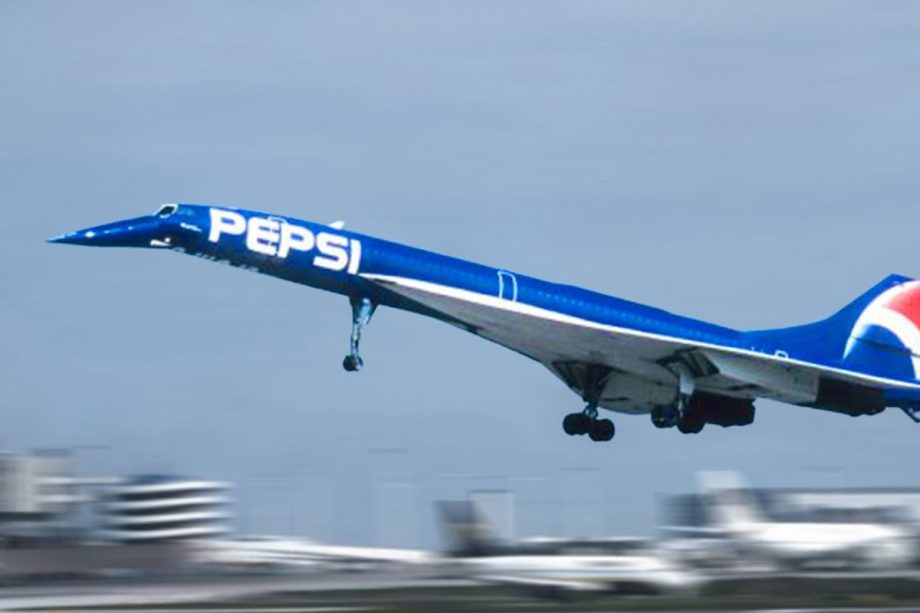 When the news of United Airlines’ plans to re-enter the supersonic passenger jet game broke earlier this month, aviation fans were beside themselves. It’s like the Concorde’s coming back!

While it’s nice to have some good news after a very tough two years for air travel, it also raises a lot of questions. The Concorde was discontinued because it was so expensive to run, and with the spectre of COVID-19 likely to hang around the aviation industry for years to come, how on earth are United going to make international supersonic travel viable?

Well, we might already have the answer – we just need to look back at what Air France was doing in the 90s.

In 1996, the drinks giant Pepsi decided they needed to raise the stakes in their endless war with Coca-Cola. So they came up with the brilliant idea to put their branding on the side of the most glamorous form of travel available, and reveal the outlandish livery with a very 90s, very excessive media ‘do at Heathrow to boot.

Pepsi was the first and only brand to ever advertise using a Concorde, and it was easily the most expensive ad campaign of its time. The whole thing is a big serve of nostalgia – it’s just so bloody 90s.

The campaign wasn’t without its issues, as the video below reveals: the blue paint caused operational difficulties for Air France and it didn’t really help Pepsi push any more cola. Despite this, we reckon high-profile livery deals like this might be a way forward for the aviation industry in 2021 (and beyond).

While commercial liveries on passenger jets are common in some countries – take Japan, where both ANA and JAL are famous for having all sorts of brands and characters on their planes, from Pokémon to Star Wars – it’s a practice that’s surprisingly uncommon, particularly on Australian planes.

But with the financial pressure of this pandemic likely to be felt by the industry for many years to come, getting more advertisements on planes might be a way for airlines to justify more frequent, cheaper services and help get people back on planes. In short, it could – and maybe should – become the new normal.

Some might argue that the fact that airline ads are so sparing makes them more novel and more effective as a form of advertising (and less on the nose for consumers). Do we want Airbuses to become like actual buses?

All we know is we’d be keen to try a supersonic flight for ourselves – and if a whopping great Contiki ad is going to make that happen for us, we’re all for it.

The post Incredibly 90s ‘Pepsi Concorde’ Could Provide A Glimpse At The Future Of Air Travel appeared first on DMARGE.