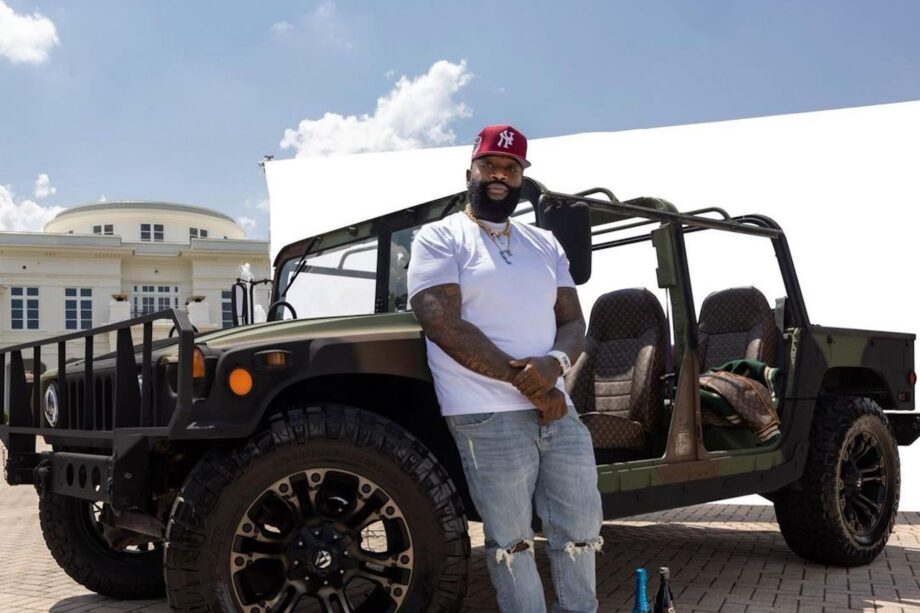 Rick Ross is one of the most successful rappers in the music industry and is the poster child for living lavishly.

Kilos of jewels and watches; dozens of high-end spirit endorsements; mansions upon mansions… But the thing he’s perhaps best known for is his obsession with all things motoring. I mean, the man has a record label named Maybach Music Group… But just as his third album is Deeper Than Rap, his love of cars is deeper than that.

Ross allegedly owns over 100 vehicles – including a few Maybachs, it has to be said – but he seems to have a real taste for Americana. His latest ride? A heavily modified Hummer H1 with some seriously jacked-up suspension, huge wheels, a camo paint job and Louis Vuitton monogram-print leather seats.

It’s a big car for an even bigger man. Ross is 1.8m tall, and the hulking Hummer seems even taller than that – close to 2m tall, by our estimation. For reference, that’s taller than a Mercedes-Benz G-Class or a Ford F-Series truck, or about two Lamborghini Miuras stacked on top of each other.

The wheels are enormous, too. The largest stock rims that ever came on a Hummer H1 from the factory were 22″, but these aftermarket numbers are much bigger, 24″ or larger. We’re surprised he could find off-road-capable tyres for them, frankly… But when you’ve got a 100+ strong car collection, you’ve probably got a very capable tyre guy.

Ironically, this Hummer is probably one of the least flashy vehicles the Big Boss owns. We’d say his two-tone Rolls Royce Wraith, bright red Ferrari 458 Italia or his Chevrolet Impala ‘donk’ with Gucci upholstery are arguably more eye-catching rides (the man’s got a thing for designer upholstery, apparently).

He’s also clearly got a thing for the second-generation Chevrolet Bel Air. He’s got four, count ’em four, baby blue ones, as well as a bright red convertible example. We weren’t lying when we said he had a thing for American cars…