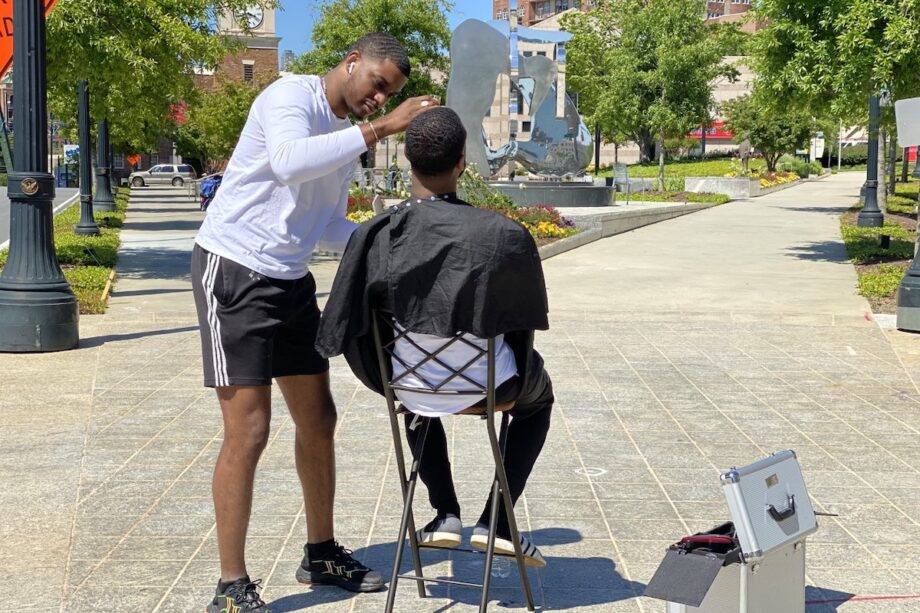 Most of Australia’s population has suffered through multiple lockdowns and strict social distancing measures this year. Sydneysiders are still suffering through what’s become Australia’s longest lockdown ever, while things aren’t much better in Melbourne. Even cities not currently in lockdown, like Brisbane, are enduring the ever-looming spectre that is The Spicy Cough, with many small businesses still feeling the pain.

One set of small businesses that have had things harder than most are barbers. Due to the inherently close-contact nature of their profession, many barbers have been forced to close their doors, some indefinitely – and this means that many Aussie men have had to deal with the terror that is the home haircut.

Some have simply grabbed the clippers and gone for a buzz cut rather than let their loved ones attack them with some scissors. Others have let it all grow out, with the ‘lockdown beard‘ becoming a standout men’s grooming trend. But for some men, these extremes won’t do.

As restrictions have eased in recent weeks in Sydney, DMARGE has seen a surprising uptick in ‘haircut hangouts’. Outdoor gatherings of up to five people for exercise or outdoor recreation are now allowed, so long as all those at the gathering aged 16 years or over are fully vaccinated. This has led to blokes taking some creative license with these new freedoms and meeting in public places with a barber to get their hair cut, using the excuse of outdoor recreation as a cover. (We’ve also heard rumours of barbers doing surreptitious house calls on the sly, as well as ‘haircut hangouts’ happening in other Australian cities.)

A notable example of this was highlighted by the Daily Mail last week, the publication sharing footage of a couple of blokes getting their hair cut by a barber whilst fishing at an unnamed Sydney beach. We’re not sure if it’s a stroke of genius, a bit grotty or a reprehensible flouting of the rules – but it’s something that’s definitely on the rise.

DMARGE spoke with some of Sydney and Australia’s top barbers to get their take on the phenomenon – and we got some fairly mixed opinions.

“I’m not going to lie, I have seen a lot of fresh cuts during this lockdown… Not everyone can live with a barber and hairdresser, right?” Jacob Martin, founder of Tate & Lyle relates.

“I understand the need for people to earn a living, especially if they have fallen through the cracks, though this time the NSW government has been great with the support for everyone. It was always going to happen with people moonlighting and being opportunistic, especially when big money is being offered… You just hope that during a pandemic that people do the right thing – both parties are guilty of the offence.”

That said, Martin says he “[doesn’t] see any issue with people who are now double vaccinated to be able to cut in these social hangouts, [it’s] no difference [than] training with groups or meeting friends for a picnic.”

“Were we having the conversation outside of a pandemic, I’d say it’s creative and interesting. Given the circumstances, it’s just an irresponsible exploitation of a potential loophole.”

“I think at the end of the day we’re all in the same boat here and it’s not really going to hurt anyone to wait until we open back up,” Trent Pridmore, founder and CEO of The Emporium Barber, comments.

“Unfortunately, the reality is that by breaking the restrictions you could actually end up hurting someone.”

“We’ve been receiving multiple messages most days since the lockdown began asking to send our guys around to people’s homes and they’ve all received the same response with a link to our website to buy themselves a hat! I personally believe that the more we try to find little loopholes in the restrictions or completely ignore them, then it’s just going to prolong the pain and cause this to drag on even more.  The last thing I’d want is to pass COVID along to someone and cause them to get seriously ill because I was doing the wrong thing.”

Doing the right thing isn’t easy, though. Khushwant Dhanoa, managing director of Truefitt & Hill Australia, points out that the allure of a ‘haircut hangout’ isn’t just about hair, but also about mental health.

“I think what is often forgotten is that men’s grooming is not just about how a man looks, but [also] has a direct impact on his psychological wellbeing. Being deprived of their grooming ritual weeks on end I am sure has had an adverse mental impact on many men. I get daily calls from customers calling up and asking when we can open up again for services, even though they know the answer – bearing testimony to the level of desperation being felt at this time.”

While this growing trend of ‘haircut hangouts’ is worrying – on multiple levels – the barbers we spoke to were quick to point out that it’s really a minority of barbers and customers doing the wrong thing.

“On the whole many customers have been great supporting our community in any way they can and being understanding,” Martin shares.

“This forced closure of nearly 3 months has decimated many small businesses but it has highlighted to me the growing issue that beauty and grooming industry people are deemed subordinate and not given the respect we deserve with pressure from external sources to do the wrong thing.”

“It seems to be a common theme with service industry professions that we should be bend the laws for our customers, which was disappointing to see.”

RELATED: ‘Secret Sauce’ That Makes A Successful Entrepreneur In 2021

“It’s tough being in lockdown but at the end of the day we’re all in it together,” Pridmore emphasises.

“No one can visit their barber so everyone’s going to be looking like they need a haircut. I think we can forgive each other for not looking our sharpest with everything going on.”

With that in mind, we caution you to ignore the temptation of a ‘haircut hangout’, because not only are you doing the wrong thing (and potentially putting your barber in a really uncomfortable, unfair predicament), but it could be a total waste of time: better to do the right thing so that restrictions can ease on schedule, and then get a proper haircut at a barber’s, guilt-free.