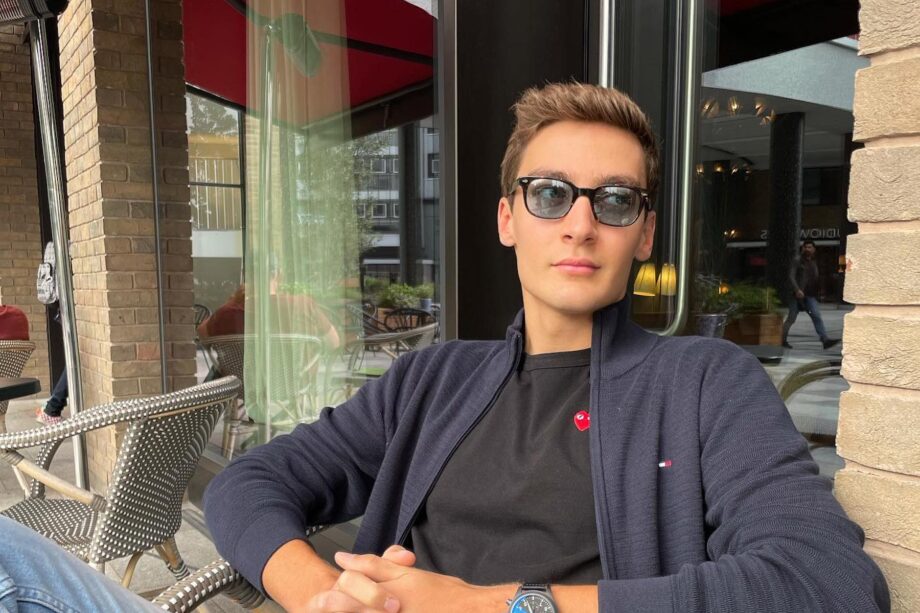 It’s been a truly exciting month for Formula One fans.

The other big news has been that rising star George Russell is leaving Williams at the end of 2021 and joining the GOAT, Sir Lewis Hamilton, at top-flight team Mercedes for 2022. It’s a move that’s been hotly anticipated for months. The 23-year-old Brit, who’s been nicknamed ‘Mr. Sunday’ for his prodigious ability to rise to the occasion on race day, has had a rocky start to the sport. Despite being shackled with an underperforming car and a lack of resources at Williams, Russell has demonstrated immense driving chops and is more than worthy of a seat at Mercedes.

It seems that Russell’s already getting comfortable with the idea of being a full-time Mercedes driver, and has already been spotted with a watch from the team’s official timepiece partner, IWC Schaffhausen. Relaxing at a cafe over the weekend, Russell shared a shot of himself wearing a Pilot’s Watch Double Chronograph TOP GUN Ceratanium – one of the most underrated models in the Swiss brand’s lineup, we reckon.

Like all of IWC’s ‘TOP GUN’ watches (more on the history of that name here), Russell’s new timekeeper features a ceramic case: specifically, it’s made out of Ceratanium, an IWC-developed material that is light and robust like titanium, but also similarly hard and scratch-resistant like ceramic. The black ceramic case, black textile strap and stealthy dial make it one cool customer.

Despite this mechanical complexity, the Pilot’s Watch Double Chronograph TOP GUN Ceratanium boasts a day-date function, a 44-hour power reserve and 60m of water resistance, all while being less than 17mm thick and light on the wrist, thanks to its Ceratanium construction.

We wonder why Russell picked this watch out of IWC’s collection. Is it a symbolic choice? The double chronograph would be perfect for comparing his lap times against those of his new teammate, Hamilton…

Russell might be ready and raring to go at Mercedes but the F1 ‘silly season’ isn’t from over. 2022’s final driver lineup is still yet to be totally confirmed, although most of the big driver moves have already been announced.

The final question mark is about the second seat at Alfa Romeo. It’s not clear whether or not current Alfa driver, Italy’s Antonio Giovinazzi, will still have a seat next year. Polish driver Robert Kubica is currently filling in for Räikkönen, who’s been sick with COVID-19 – there’s every chance that the seasoned racer could stay there more permanently.

But with plenty of talented young guns angling for a go at F1 – the Netherlands’ Nyck de Vries, China’s Guanyu Zhou, Britain’s Callum Ilott and Australia’s very own Oscar Piastri just to name a few – both Giovinazzi and Kubica have a fight on their hands.