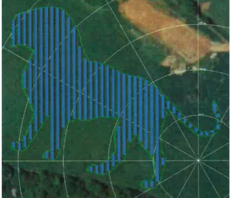 A solar farm is to be built in the shape of the Whipsnade chalk lion at ZSL Whipsnade Zoo in a bid to help cut the carbon emissions of the UK’s largest zoo, the Zoological Society of London (ZSL) today announced.

Whipsnade zoo is one of two zoos belonging to the conservation charity ZSL and is home to a 147-metre-long lion carved from chalk that can be seen from the surrounding hills. The zoo now plans to install a solar farm in the shape of the lion on the opposite side of the zoo, that would cover two acres of the 600-acre site and provide 1MW of capacity, generating around a third of the electricity needed to power the zoo.

“We are really excited about our plans for a Solar Lion to join our Whipsnade White Lion on the beautiful Chiltern hills and even more excited about the difference she could make to the planet,” said Owen Craft, chief operating officer at ZSL Whipsnade Zoo.

“As a global conservation charity, we know only too well the devasting effect climate change is having on the world’s wildlife, as well as on the survival of our own species. As we approach the United Nations climate change conference COP26 in Glasgow, we’re calling on world leaders to put nature at the heart of global decision making, and we’re committed to that ourselves.”

The solar lion is part of the zoo’s plans to achieve net zero carbon emissions by 2035 and halve the emissions generated from electricity and fossil fuels over the next decade.

“I hope that our Whipsnade Solar Lion, when she is in place, will be a beacon of light reminding people that change is not only necessary, but possible,” Craft said.

The news came on the same day as the government announced a major boost for the UK’s solar farm industry, confirming £10m would be ringfenced to support onshore wind and solar projects as part of the next £265m round of clean power contracts that is set to be awarded under the UK’s Contract for Difference (CfD) regime.