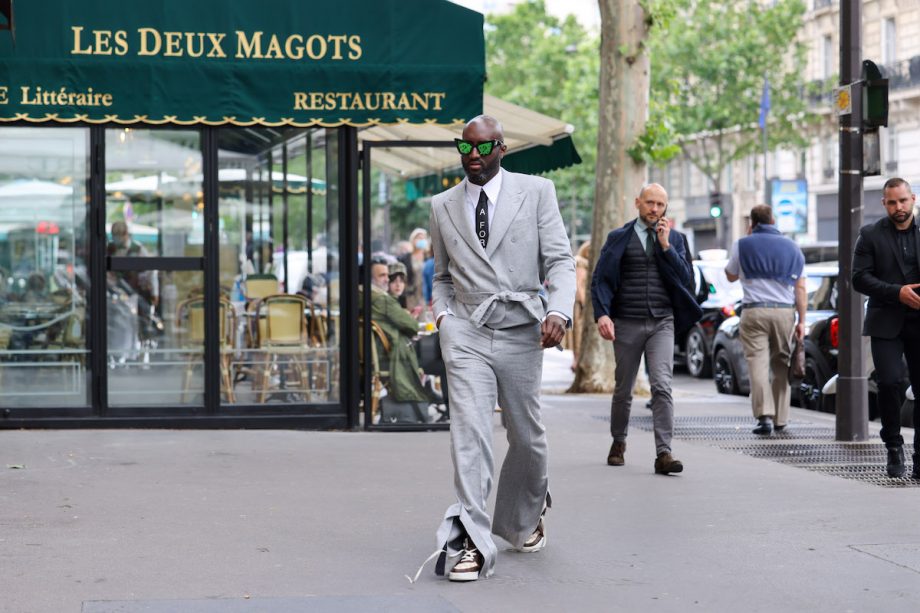 Until now, it seems. The 40-year-old tastemaker was spotted on the streets of Paris – specifically, outside the famous Saint-Germain café Les Deux Magots – wearing an intriguing outfit of his own design that’s certainly turned some heads.

Naturally, it’s head-to-toe LV, but it’s not your usual haute couture suit. The double-breasted ensemble features a belt à la a trenchcoat and the trousers feature insane split flares like a pair of break-away trackpants.

It’s the pointy, mirrored shades that are the most bizarre element: the question-mark design on them immediately calls to mind the Batman villain The Riddler – or some similar baddie from a Pixar or Illumination film. We wonder what Virgil’s final boss music sounds like…

The most exciting element of the outfit for many fashion fans, however, is what’s on his feet: a pair of Louis Vuitton x Nike Air Force 1s, recently unveiled during LV’s SS22 “Amen Break” show.

Abloh’s previous ‘The Ten’ collaboration between Off-White and Nike has produced many of the most desirable sneakers in recent memory. It seems as if this LV collaboration will incorporate some very Off-White-esque designs – and no doubt drum up similar levels of hype.

LV employee Imed Soussi took to Instagram to show off the collaboration in greater detail, revealing that the sneaker will be available in a variety of colours, materials as well as in both high and low-top variants.

The truly villainous thing about these LV AF1s will no doubt be the price, if Nike’s recent collaboration with Dior is anything to go by. A normal pair of AF1s will set you back around AU$160, but we wouldn’t be surprised if a pair of these go for ten times that. Maybe even twenty times that.

On that note, if you’re looking to make some savvy money moves, read our story about why investing in sneakers might be a better move than playing the stock market in 2021.