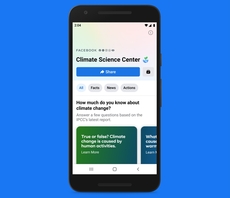 US tech giant Facebook has this week announced an update to its climate policy, in a bid to better engage its users with climate issues and crackdown on ‘climate misinformation’ on its platform.

The company confirmed it would expand its Climate Science Information Center and rename it as the Climate Science Center, adding new features, like quizzes, to better inform and engage Facebook’s community on climate change.  It also promised to step up efforts to counter ‘climate misinformation’ through the launch of a new Climate Misinformation grant program, administered by the International Fact Checking Network. Through a $1m investment in the new grant program, Facebook will invest in proposals that build alliances between fact-checkers, climate experts, and other organisations to support projects that focus on combating climate misinformation.

Moreover, the company said that following consultation with climate communication experts from the Yale Program on Climate Change Communication, University of Cambridge, and Monash University, it is to add new facts to the Facts About Climate Change section of the Climate Science Center, so as to “debunk common climate myths and provide reliable information from leading climate organisations”

In addition, the company said it would elevate new ‘Climate Voices’ through a new video series to highlight young climate advocates on Facebook and Instagram between New York Climate Week and COP26.

A new report released this week by World Resources Institute and Climate Analytics has concluded that the G20 bloc could put the world on track to meet the goals of the Paris Agreement if there were to come forward with more ambitious national climate action plans.

The study shows how the G20 is responsible for around 75 per cent of global greenhouse gas emissions, meaning that were G20 nations to align their official national climate action plans – or Nationally Determined Contributions (NDCs) in the UN jargon – with a 1.5C pathway, then global warming this century could be limited to 1.7C. Such an outcome would both meet the Paris Agreement’s target of keeping temperature increases ‘well below’ 2C and keep alive the accord’s stretch target of keeping temperatures increases below 1.5C.

However, separate analyses this week from the independent Climate Action Tracker project and the UN have both highlighted that current NDCs are well off track for deliver on the goals of the Paris Agreement.

The German government has reportedly approved new procurement rules designed to boost demand for ‘climate-friendly’ products that will come into effect from January 2022.

Clean Energy Wire reported that the cabinet signed off on the new AVV Klima package, which will apply a list of banned products such as disposable tableware and packaging for events and canteens, or outdoor heaters.

“The federal government is setting a good example and will be purchasing in a climate-friendly way in the future… the public sector can make a significant contribution to promoting innovative and climate-friendly products and technologies,” said economy and energy minister Peter Altmaier.

The funding will help the environmental consultancy showcase the latest sustainable construction practices across the region.

“The UAE and the UK share a long and rich history, but with today’s agreement we are looking to the future,” said Prime Minister Boris Johnson. “By working ever more closely together, our nations will be at the forefront of the industries of the future, helping to tackle climate change and boost prosperity.

“Ambitious partnerships like this are central to the government’s strategy to be a leading global force in science and technology, driving major investments to level up across the UK and create high-value jobs. We will turbocharge this at next month’s Global Investment Summit in London.”

The Indian government this week approved plans for a new $3.5bn incentive scheme to help boost demand for electric and hydrogen fuel-powered vehicles and promote the manufacture of drones.

“The incentive scheme has been designed to help India become a global player in the automobile sector,” Anurag Thakur, minister of information and broadcasting, told reporters.

Bloomberg reported this week that the US, UK, France, and Germany are to send a delegation to South Africa later this month in pursuit of a deal that could see the African nation commit to start phasing out its coal plants.

The hope is that a coal retirement plan from South Africa, enabled by significant financial support from industrialised nations, could be announced at COP26 and provide a tangible win for the UK hosts calls for nations to end investment in new coal plants.

In related news, European Commission president Ursula von der Leyen announced this week that the bloc would boost its climate funding for low-income and climate vulnerable countries through to 2027 by €4bn.

Addressing the EU parliament on Wednesday, Von der Leyen told lawmakers major emitters like the EU and the US have “aspecial duty to the least developed and most vulnerable countries”

The pledge comes in the same week as a new analysis again reiterated how industrialised nations are around $20bn a year short of meeting their pledge to provide $100bn a year of climate finance to poorer nations from 2020 onwards. The hope is that Brussels move will trigger a similar uptick in funding from Washington that can ensure the €100bn target is met before the COP26 Climate Summit kicks off in November.

Reuters reported this week that the US and EU are leading a global push to secure a new agreement to curb methane emissions ahead of the COP26 Climate Summit.

The news agency said it had seen documents that suggest the two economic superpowers have agreed to aim to cut emissions of methane by around a third by the end of this decade and are pushing other major economies to join them.