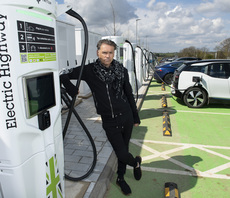 The long running power tussle between England’s oldest green energy suppliers has ramped up further this week, after Good Energy again urged its shareholders to reject Ecotricity’s latest takeover offer, slamming its arch rival as an “unfit owner with an unsuitable plan”.

The new offer comes after the Stroud-based firm has been rebuffed three times by Good Energy shareholders since launching an initial offer of 340 pence per share in June.

Ecotricity, which already owns a quarter of Good Energy, said the offer was a “good opportunity for [Good Energy] shareholders to exit at an historically high valuation of the company”.

In financial documents, Ecotricity argued Good Energy had “struggled to make progress” over the last five years due to a loss of domestic customers and their replacement with lower margin business. “We do not believe the current board has a plan that can reverse this decline,” they state. “This is a good time for a change of direction.”

Ecotricity said the merger of the two energy companies would create an outfit in a better position to compete against the UK’s ‘Big Six’ energy suppliers in an increasingly crowded power market, as well providing a counter-narrative to ‘greenwashing’ from some energy suppliers. Unlike other energy suppliers that purchase certificates to back up their green claims, Ecotricity and Good Energy provide customers with electricity generated from renewables projects.

“In our view this is a battle for the soul of the green energy market which itself is a key step to a zero carbon economy,” Ecotricity said.

But Good Energy this week urged its shareholders to once again reject Ecotricity’s advances, arguing the rival firm’s “poor business condition makes it an unfit owner for the company”.

“Good Energy has shown strong growth in the first half of this year, and the nature of the rapidly growing markets in which the company operates – clean energy and transport – mean there is significant headroom for more,” said Will Whitehorn, chair of Good Energy. “This is in stark contrast to Ecotricity, which has been loss-making for the past four years, demonstrating how unfit an owner Ecotricity would be for Good Energy.”

Whitehorn said Ecotricity’s offer, if successful, would risk “severely damaging [Good Energy’s] potential for further growth and deny our investors the opportunity to be a part of it”.

Good Energy shareholders have until 10 October to make a decision.

The two energy suppliers’ damning assessments of each other’s performance mark the latest chapter in an acrimonious power struggle that dates back more than a decade.

In 2015, Good Energy lodged a complaint with UK’s advertising authority over Ecotricity’s claim to be the UK’s greenest energy supplier.

Less than a year later Ecotricity CEO Dale Vince’s attempt to gain a seat on the Good Energy board after snapping up a stake in the firm drew a public rebuke from Good Energy.