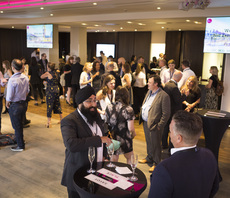 The final countdown to the Net Zero Festival 2021 has officially begun.

After a long 18 months spent in various stages of Covid-19-driven lockdown, hundreds of leading lights of the green economy were finally able to once again meet face-to-face at yesterday’s official launch event for the Net Zero Festival, which took place at London’s Institution of Engineering and Technology (IET).

Overlooking the Thames, the event kicked off with an illuminating keynote speech from Pete Betts, the UK government’s former chief climate negotiator, who took the audience through the key issues, challenges, and opportunities surrounding a monumentally important two months for global climate action ahead of COP26. That was shortly followed by a fascinating discussion chaired by BusinessGreen’s James Murray, with WWF UK’s CEO Tanya Steele, the CBI’s head of energy and climate change Tania Kumar, and Climate Change Committee CEO Chris Stark all offering compelling arguments as to why far more ambitious policy, investment, and civil society climate action is urgently required.

The event – a selection of photos from which can be viewed above – marked the start of the final countdown to the second annual Net Zero Festival, which kicks off in less than three weeks.

There is still time to sign up for the virtual, three-day event, which will see a host of top speakers and thousands of delegates coming together to discuss the immense challenges and opportunities arising from the net zero transition. The three day broadcast is set to be hosted by BusinessGreen editor James Murray alongside top broadcast journalists Gavin Esler and Lucy Siegle.

Interested parties can secure their tickets for the Net Zero Festival here.